(Just looking for help? Try the in-game help, or the command list.)

In general, roguelikes are about a single character traversing a dungeon full of deadly monsters that have to be defeated in combat. Kerkerkruip is no exception to this rule. Where Kerkerkruip does differ from other roguelikes, is in its form or presentation. Instead of the usual top-down graphical view of the world, Kerkerkruip is a prose-based interactive fiction game.

An interactive fiction is a story in which you determine what actions the protagonist performs. As a player, you are given prose descriptions of the world around you, and you then type short commands indicating what you want to do: “go north”, “take glass cannon”, or “read scroll of summoning”, to take a few examples from Kerkerkruip. The game then prints out a new prose description based on the results of your actions. “You speak the awful spell, and a zombie toad appears in front of you.”

In general, interactive fictions are either puzzle-filled adventure games or pure stories. Kerkerkruip is relatively untypical in being a roleplaying game, and — as far as we know — unique in being a roguelike.

Kerkerkruip aims to be an exciting short-form roguelike (a successful game will last about half an hour) with great tactical and strategic depth, innovative game play, zero grinding, and a sword & sorcery setting that does not rehash tired cliches. You will not be fighting twenty identical rats with a rusty sword; though you might find yourself fighting the psionic mindslug with a mace that grows bigger every time you hit someone with it. All enemies, items and locations in the game are unique and interesting. If you want to read more about how we designed the game for tactical and strategic depth, you can find an article in which I identify seven trade-offs that form the core of Kerkerkruip‘s decision making here.

Kerkerkruip is free software, in both senses of the term. You not only don’t have to pay for it; but all its source code has been published under the GPL version 3 (or later) and is publicly available.

A still from one of the opening movies:

The swarm of daggers in the rogue’s gallery: 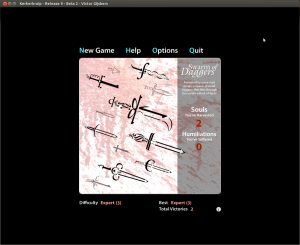 The opening screen of an actual game:

“[M]asterpiece of game design, tighter and more addictive than most graphical twitch games. No preamble, just greased up leaping back into another horrible death in the interesting, randomly generated dungeon. […] The game manages to be one of the best roguelikes I’ve ever played without slavishly trying to reproduce traditional mechanics–instead, the destination of a fantastic roguelike is arrived at by entirely different paths, systems created or remade by the author for the medium of text.”

“[T]his is a game where experience, exploration and repeat plays really pay off, and the strategic element is always vivid, the prospect of victory always tantalising. Ultimately, Kerkerkruip is an essential and massively replayable game for dungeon and combat fans, and also demonstrates the kind of novelty and elegant design that is inspiring in general.”

” Every time I played Kerkerkruip I discovered something new, died in an interesting way and wanted to go back for more. All in all, a great roguelike! Two thumbs up!”

” I know I’ve complained about RPG-ish comp entries with randomized combat before, but those were ones that did it badly — which most attempts do; this is something that’s a lot easier to do badly than well. Typing “attack” over and over is not fun. Developing tactics is. Kerkerkruip gets it right.”